The Weill Award was established in 2018 to celebrate the 20th anniversary of the medical college’s renaming in honor of the institution’s foremost benefactors, Joan and Sanford I. Weill. The Weill Award recognizes outstanding faculty members whose transformational work enhances health and healthcare worldwide. Dr. Hempstead, who is also the O. Wayne Isom Professor of Medicine and a professor of neuroscience in the Feil Family Brain and Mind Research Institute, accepted the award during a gala on March 3, during which she thanked her countless mentors at Weill Cornell Medicine for providing her valuable guidance throughout her career.

“Tonight is really a celebration of Weill Cornell Medicine,” Dr. Hempstead said, “its dedication to helping faculty members thrive, its ability to provide support for new programs while expecting excellence and its unwavering academic vision.”

A distinguished hematologist, neuroscientist and administrator, Dr. Hempstead is a leading force in academic medicine whose more than 30-year career at Weill Cornell Medicine has spanned research, patient care and education. 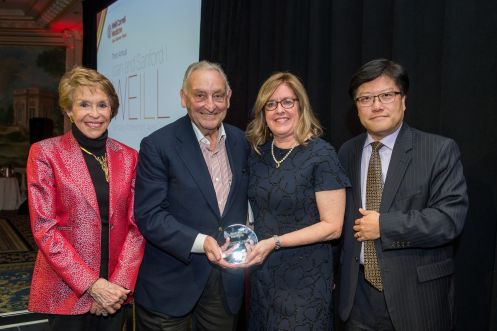 Dr. Hempstead joined Weill Cornell Medicine as an internal medicine resident, later completing a fellowship in hematology and medical oncology before joining the institution’s faculty in 1987. She rose quickly through the faculty ranks and served in numerous leadership roles, including co-chief of the Division of Hematology and Medical Oncology in the Weill Department of Medicine from 2004 to 2012.

As associate dean for faculty development from 2012 to 2016, she led the institution’s efforts to promote collaborative team building among clinical researchers and translational and basic scientists. In her role as senior associate dean for education from 2015 to 2019, she oversaw the implementation of the institution’s innovative medical curriculum, which integrates the scientific basis of disease with early exposure to clinical care and a formal curriculum on professionalism. The program also provides a dedicated six-month research block to complete the Areas of Concentration capstone program.

Appointed dean of the Weill Cornell Graduate School of Medical Sciences in 2019, Dr. Hempstead is dedicated to ensuring that doctoral and master’s students receive a foundational curriculum and exceptional laboratory experiences that prepare them to succeed in a rapidly changing scientific environment.

Dr. Hempstead’s research investigates the biological activities of growth factors, specifically neurotrophins, which regulate cell development and function. While these factors have been studied extensively in the brain, where they promote neuronal signaling and memory formation, her laboratory identified important actions in the vasculature, to regulate vascular development and induce new blood vessel growth following injury. Her lab has also identified unexpected activities of precursor forms of neurotrophins that induce neuronal death and impair brain function. Dr. Hempstead’s body of work has clinical implications in acute neuronal injury, neurodegenerative disease, and in complex behaviors of anxiety and depression.

“Barb’s career trajectory is the epitome of what we aspire to in academic medicine – to achieve excellence in three domains: patient care, research and education,” said Dr. Augustine M.K. Choi, the Stephen and Suzanne Weiss Dean of Weill Cornell Medicine. “And lucky for us, she’s chosen Weill Cornell Medicine as the place to share her talents.”