As chief of the Limb Lengthening and Complex Reconstruction Service at the Hospital for Special Surgery, Dr. S. Robert Rozbruch (MD '90) really gets to know his patients and their families. Treatment for their conditions often involves multiple surgeries and follow-up appointments over the course of several years. But his relationship with patient Amber Hamilton, WCM class of 2022, takes on new life as he mentors her through her orthopedic surgery residency.

Hamilton was born with X-linked hypophosphatemia, a rare bone disorder that impacts the body's ability to absorb calcium and vitamin D. Hamilton became severely bowlegged from the disorder and was referred to Dr. Rozbruch – who is also a professor of clinical orthopedic surgery at Weill Cornell Medicine – when she was just 11 years old.

"It's imperative to straighten the legs of kids with this disorder as they enter adulthood, so the goal was to do just that," says Dr. Rozbruch, who has worked at HSS since 1996 and helped establish the Limb Lengthening and Complex Reconstruction Service. 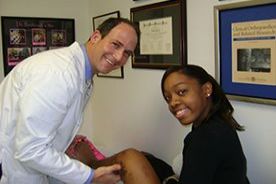 Over the course of the next 10 years, Dr. Rozbruch performed 16 major surgeries on Hamilton. During her time as a patient, Hamilton became increasingly interested in medicine. Fascinated by the X-rays that showed her bones healing and growing, she says she wanted to understand the science behind her healing and regrowth.

"Some kids just get the bug, and I think she got it," says Dr. Rozbruch. "She found the whole process so interesting and she followed through on it."

After Hamilton's freshman year of college at the University of Pennsylvania – which is coincidentally Dr. Rozbruch's alma mater – she returned to HSS, not as a patient but as a volunteer.

"I was able to shadow Dr. Rozbruch that summer, and that experience further solidified my interest in orthopedics. From then on, I knew it was what I wanted to pursue," she says, adding that the doctor even gave her a white coat to wear. "It was so cool. I’ll never forget how awesome that was."

When Hamilton was accepted at Weill Cornell Medicine, she reached out to Dr. Rozbruch right away. He told her about a summer fellowship at HSS, which she was admitted into after her first year, with Dr. Rozbruch serving as her mentor. "To go through this whole experience as a patient and then to be able to see it from the other side and understand it from a different perspective has been very fulfilling for me," says Hamilton.

Not only was she able to scrub in with Dr. Rozbruch and watch him carry out the same surgeries he had performed on her, but she was also able to spearhead research assessing the psychosocial issues and challenges that adolescent patients face while going through leg lengthening surgery. Hamilton used her personal experience to create the study's survey questions.

Now in her second year of medical school, Hamilton is working on balancing her research at HSS with her course work.

"My passion for orthopedics comes from a genuine place, and I am happy to be where I am right now," says Hamilton. "I am so grateful to Dr. Rozbruch for his help and guidance over the years."

Over the span of his career, Dr. Rozbruch has had a handful of patients go on to become physicians, but Hamilton is the first who has expressed interest in pursuing orthopedic surgery.

"She has always had a great attitude and personality," says Dr. Rozbruch. "I think she is going to make a great doctor."