Nothing Up His Sleeve

Dr. Ricardo Rosenkranz is a successful professional magician—but one of his greatest feats is giving medical students valuable insights into the doctor-patient relationship. For the past decade, Dr. Rosenkranz M.D. '90—a neonatologist and assistant professor of clinical pediatrics at Northwestern University Feinberg School of Medicine—has tapped his prestidigitation skills to teach a course he designed entitled Medicine and Magic. Offered to first- and second-years and fulfilling a humanities requirement, the five-week course features Dr. Rosenkranz and fellow (non-physician) magicians performing illusions that underscore various concepts related to medical practice, from empowering people to navigate the healthcare system to establishing a relationship with a new patient.

During one particularly memorable lecture, a guest magician performs a “mind reading” act, and Dr. Rosenkranz uses the students’ reactions as a window into how beliefs are formed. “After the applause, I ask how many of them believe he could actually read their mind,” he says, “and invariably over 50 percent of the class raises their hands.” As he goes on to explain, in a time when medicine has increased in complexity, patient beliefs and perceptions truly matter; it’s vital for future doctors to understand how beliefs are formed, so they can communicate with patients effectively. Says Dr. Rosenkranz: “For these students to go through an experience as meaningful as suddenly believing that somebody can read their mind—it’s a very powerful moment for them.” 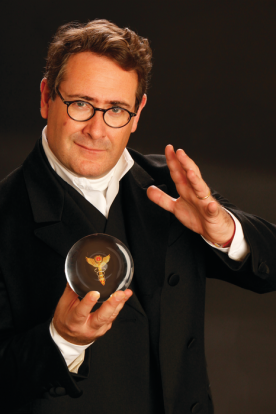 Dr. Rosenkranz discovered his love of magic in the late ‘90s, after he wandered into a magic shop in his native Mexico City and was inspired to learn a few tricks. He has gone on to establish a thriving part-time career, performing his one-man show, The Rosenkranz Mysteries: Physician Magician, across the United States; he has appeared at Los Angeles’ legendary Magic Castle and been featured on TV shows like Penn & Teller: Fool Us. In one of his signature illusions, Dr. Rosenkranz has individual audience members hold a box of alphabet blocks and think of the place they’d most like to go; he tells them that they have the power to rearrange the blocks with their mind—and when they open the box, they’re astounded to find the name of their dream destination spelled out. “I’m very proud of that number, which is about empowerment,” says Dr. Rosenkranz, who also impresses on his medical students the importance of encouraging patients to educate themselves about their own conditions and to advocate for themselves within the healthcare system. “If a doctor isn’t able to empower his patients, he fails.”

As Dr. Rosenkranz sees it, his two passions have a surprising amount in common. “The history of magic and medicine is connected, anthropologically speaking,” he explains. “The very first physicians and healers were shamans, and shamans were also entertainers and magicians.” Today, he says, successful magicians and physicians share some fundamental skills, such as the ability to relate to and engage with people. “In magic, it’s all about the audience members’ experience,” he observes. “Hospitals and other organizations are very interested in understanding the patient experience—they’re looking more and more at patient satisfaction—and this is what we performers do.”

At the end of Dr. Rosenkranz’s course, students are given a choice: they can write a 15-page paper on a topic relating to the connection between medicine and magic, or they can put their own magical skills to the test by developing a trick that they perform in a show for their peers. “In 10 years,” Dr. Rosenkranz says, “I’m happy to say that no one has ever written the essay.”