In Sight: Dr. Schwartz doing an exam at the main clinic in Riobamba, the capital of Ecuador’s Chimborazo Province. Photo provided.

Two years ago, in a remote region of Ecuador, ophthalmologist Dr. Elwin Schwartz, MD ’76, helped give a six-year-old girl the gift of sight. The child had been blind since birth because of a clouding in the lens of her eyes, known as congenital cataracts; Dr. Schwartz and a colleague performed a 15-minute surgery that reversed the condition. “Within a couple of days,” he says, “she could see with almost perfect vision.”

Since retiring from his Middletown, Connecticut, practice six years ago, Dr. Schwartz has been offering hope to the thousands of people he and his colleagues have treated at a clinic in a town called Riobamba, perched 9,700 feet up in the Andes Mountains. “No one in this area had ever seen an eye doctor before,” says Dr.  Schwartz, noting that there are only a few hundred practicing ophthalmologists in Ecuador, a country of 15 million. Its poor and often unemployed indigenous people—like many residents of Chimborazo Province, where the clinic is located—typically lack any healthcare beyond the tribal medicine that local shamans practice. “But now, people know they have a resource,” he says of the clinic, “which is so critical, especially for families with kids.”

Dr. Schwartz never planned on working in global health after retirement. But when a friend who had founded a pediatric medical and dental clinic in Ecuador offered him the chance to open an eye clinic there, Dr. Schwartz agreed immediately—in part because establishing a permanent presence in an in-need community seemed like a good, sustainable way to help people. “This feels so much better to me than going to Africa this year and India the next,” says Dr. Schwartz, who went on one-off medical mission trips to Mexico earlier in his career, and now visits the Ecuador clinic regularly. But even though he’d been given an open invitation to establish an eye clinic in his friend’s facility, known by the Spanish acronym FIBUSPAM, Dr. Schwartz found that launching it wasn’t as straightforward as he’d hoped. For instance, having secured a full suite of eye instruments donated by friends, colleagues and business associates, Dr. Schwartz arrived in Guayaquil—the closest major city to Riobamba—to find the equipment tied up in customs. So he and a colleague who’d traveled with him improvised, providing more than 1,000 vision screenings on that first trip with the handheld instruments they’d packed in their suitcases. 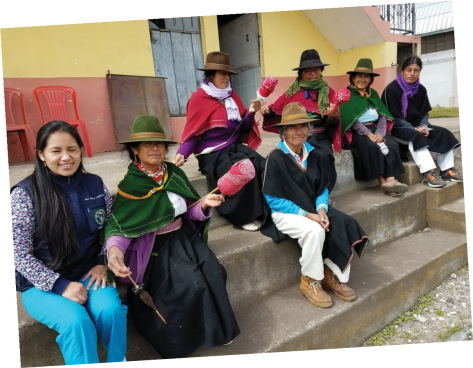 Women spinning wool yarn while awaiting an exam at an off-site clinic (an employee is at left in scrubs). Photo provided.


Since then, the clinic—which is open seven days a week, year-round (except for holidays), and staffed by a full-time ophthalmologist from Nicaragua and an optometrist from Quito—has screened and treated thousands more locals. It also operates regular off-site clinics, which vastly enriches their quality of life; Dr. Schwartz cites the cases of women who make their living by weaving or making beads, whose work suffers when their eyesight weakens as they age. “If we can identify these women and give them a simple pair of reading glasses,” Dr. Schwartz says, “they’re able to function, make money to support their family, and be part of society again.” Similarly, providing glasses to  children who need them often allows them to do better in school and to help their families around the house.

Dr. Schwartz says the bulk of the clinic’s other work consists of operating on people with cataracts, a curable form of blindness that is thought to affect more than 120,000 Ecuadorans. On his last trip alone, Dr. Schwartz identified 260 people from Riobamba and the surrounding region who needed the surgery— including elders who require almost around-the-clock care from relatives once they lose their sight. “These people are walking everywhere and cooking over hot stoves,” Dr. Schwartz says. “Dangerous often require treacherous drives along landslide-prone cliffs to reach nearby tribal regions. Many times, he says, just fitting people with free eyeglasses things to do if you can’t see.” Cataract surgery—which is often performed at the clinic by volunteer teams from organizations such as Vision Health International and SEE International—not only gives them back their independence, he says, but frees up family members to return to work. In addition, other types of eye operations are performed on adults and children in the clinic’s operating rooms.

The entire FIBUSPAM clinic now operates on a budget of about $300,000 a year, funded through private donations and grants; many of the medical staff who volunteer there also donate equipment and medications. Dr. Schwartz spends a week or more each year at the clinic, often accompanied by his wife, Cheryl, an optician. That leaves him plenty of time to travel, babysit the couple’s five granddaughters, and pursue other passions such as skiing, sailing and playing the odd game of golf. He also does logistical work for the clinic remotely, such as obtaining new equipment or helping to recruit staff. “In the last five-and-a-half years, what started as just an idea has grown into a self-sustaining clinic that has exceeded my expectations,” he says. “It still blows my mind how much we’ve accomplished.”

This story first appeared in Weill Cornell Medicine, Vol. 17. No. 2