“Arguably, medicine is the most noble profession, and we have to intervene so we’re not placing so much stress on our students and preventing them from becoming the best doctors they can be,” said Dr. Choi, as he stood in front of an audience of more than 350 medical school educators, students and researchers assembled at the Manhattan Ballroom of the Grand Hyatt hotel in New York City.

The two-day conference, held Sept. 18-19 and hosted by Weill Cornell Medicine in partnership with the Association of American Medical Colleges, Associated Medical Schools of New York and the American Foundation for Suicide Prevention, was designed to address the increasing rates of psychological distress among medical students nationwide. The symposium spotlighted the findings of leading mental health researchers, clinicians and educators while giving a needed platform for students and stakeholders to de-stigmatize the conversation around mental health. 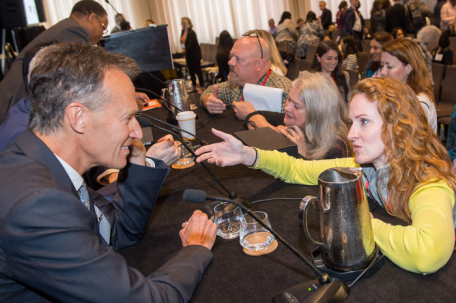 An attendee of the National Conference on Medical Student Mental Health and Well-Being speaks with panelist Dr. Richard Friedman following a conference session.

The symposium was a safe space for frank discussions about what the medical school climate has been like in the past, where it is now and what needs to change for the future.

Researchers discussed everything from reassessing how medical schools handle the stresses of exams to student suicides to the challenges faced by students who are underrepresented in medicine.

One of the innovations presented on the first day was the work of Dr. Francis S. Lee, chair of the Department of Psychiatry at Weill Cornell Medicine and psychiatrist-in-chief at NewYork-Presbyterian/Weill Cornell Medical Center, who demonstrated his digital cognitive behavioral therapy (CBT) app designed to help teens and young adults learn behavioral skills to address their anxiety and depression.

Interest in this kind of tech is high, especially given rising rates of anxiety and depression among students nationwide. Dr. Lee highlighted statistics that showed more than 60% of young people between 14 and 22 download mobile apps to treat their mental health. He said retaining these young users is a challenge since many drop these apps after initial interest. Audience questions at the end also underscored continuing debates over whether or not these kinds of apps are more useful as a complement to in-person therapy.

Dr. Richard A. Friedman, professor of clinical psychiatry and the director of the Student Mental Health Program at Weill Cornell Medicine, touched on the age-old question of whether medical students can “have it all”: mental health and resilience.

He said the objective for administrators should be to not only better identify and treat mental illness, but to “help foster resilience” in medical students. Given the rising demand for mental health services that we see in our students, he said, “we need to provide more resources.”

"Students should not feel inhibited about reaching out. Medical students and graduate students, we are here to help,” Dr. Hempstead said. 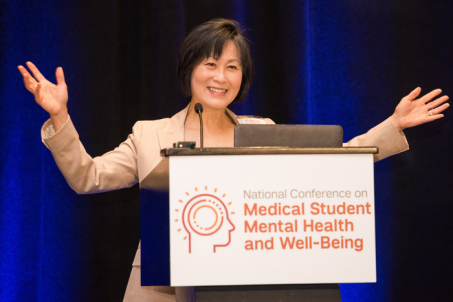 The first day of the conference underscored the need for administrators to be more receptive of creative approaches to helping students. For many who attended, the conversations arising from the audience question-and-answer sessions resonated the strongest.

Dr. Lisa M. Meeks, an assistant professor of family medicine at the University of Michigan Medical School, said she “was touched by the self-disclosure of many of the presenters and audience members,” when interviewed after her own lecture on students with psychological disabilities. Her lecture delved into medical schools’ standard responses to student mental health concerns, like leave of absence policies, and how they could be more inclusive of the wide range of functioning across different psychological disabilities.

“This is a major shift in the way we address the topic,” she said of the conference. “Bringing the researchers and educators together allows for the development of new ideas and potential solutions.”

The session on student suicide prevention provided a range of perspectives on ways to address an especially difficult topic on medical school campuses. Dr. Christine Moutier, chief medical officer for the American Foundation for Suicide Prevention, said that officials in academic medicine have to “become the helpers who are walking the walk of what science is telling us.”

Later in the session, Dr. Timothy C. Marchell, director of the Skorton Center for Health Initiatives at Cornell Health, framed suicide as a public health issue requiring a comprehensive approach to prevention, including restricting access to means of suicide. Cornell’s approach also includes correcting the misconception of the university’s Ithaca campus as a “suicide school,” a myth that has resulted from at-times sensationalistic media reporting of past suicides.

Attendees took a moment to honor a member of the Cornell community, when Dr. Marchell addressed the memory of Dr. Greg Eells, the former head of Cornell’s counseling and psychological services department, who died by suicide the previous week.

After this session, Dr. Mildred Rust, 91, a retired psychiatrist and a graduate of Weill Cornell Medicine’s Class of 1956, got up during the question-and-answer period to share a memory of her time as a student.

Her classmates had learned she was being treated for depression, she said. When she rejoined her classes, her classmates showed empathy, “greeted me and shook my hand,” Dr. Rust said. “This indicated Cornell’s environment of openness about the disclosure of mental illness, and was a forerunner of the initiation of this conference.”

At the end of the conference, Dr. Choi revisited his call for change and expressed his hope that there would be more conferences like this to come.

“There’s an urgency to this. All social justice takes time,” Dr. Choi said. “This is an area in which we need to have a sense of urgency and we need all of you to move forward.”